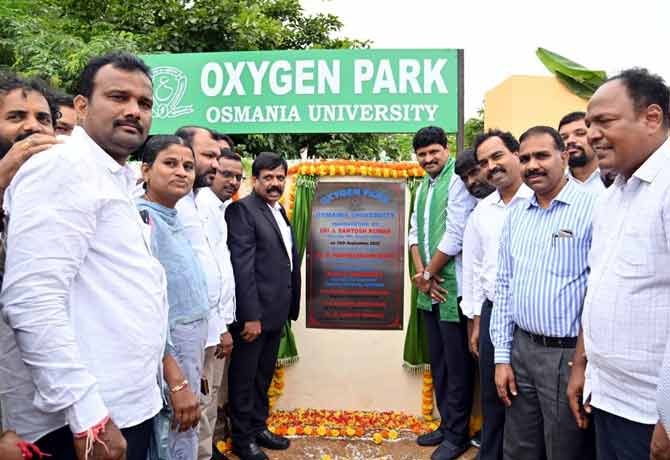 Manatelangana/Hyderabad: Rajya Sabha member Joginapally Santoshkumar said that the surroundings of Osmania University with its green environment are giving life to the people of nearby areas. Vice-Chancellor Acharya D. inaugurated the oxygen park established in OU in collaboration with HMDA as part of Haritaharam program undertaken by the state government. He started with Ravinder. Later, Kaliya went around Oxygen Park along with VC, Registrar and OSD. Professor Ravinder explained to Santosh Kumar about the development of Momin pond and other infrastructure. On this occasion, Santhosh Kumar assured the VC that if he comes with a comprehensive report (DPR), he will support more development projects in Osmania campus including oxygen park. Ravinder said that oxygen park has been developed with 200 types of medicinal plants and trees. He clarified that there are more than a thousand peacocks in this park. He said that with the efforts of Arvind Kumar, who is the commissioner of HMDA and the vice chancellor in charge of OU, saplings have been planted in OU on a large scale. Vriksha Mitra said that he is happy to make the park accessible to students and public through the hands of MP Santoshkumar. Pedestrians have been restricted to a certain extent in view of the preservation of living species and the cleanliness of the environment… it has been revealed that they are only allowed to a certain extent in the morning and evening. It was clarified that with the cooperation of the Chief Minister, the premises of Osmania has become pleasant with green trees. On this occasion, Chief Minister KCR and MP Santosh Kumar thanked. Santhosh Kumar, VC Ravinder, Registrar Lakshminarayana, OSD Redyanaik planted saplings at Ozone Park on the occasion of Ozone Day.

Open heart surgery at MGM hospital for the first time